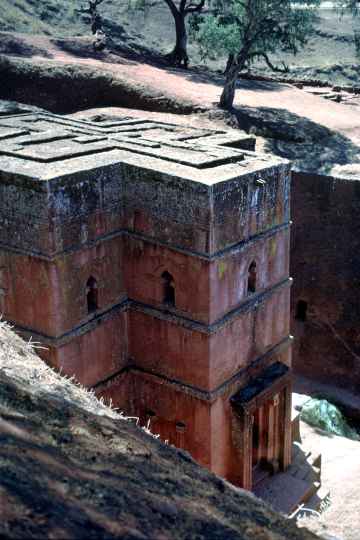 For people brought up in the northern hemisphere, Christmas is traditionally associated with the snow and ice of winter. In the southern hemisphere and equatorial regions, of course, the festival is held in much warmer weather. But snow or sun, people of many nations has celebrated Christmas yet again, although not necessarily on the same day. The Gregorian calendar celebrates Christmas on the 25th of December while Ethiopian Christmas falls on January the 7th – a hot summer’s day – , since Ethiopia uses still the Julian calendar. While excitement over Christmas festivities dies down in other parts of the world in Ethiopia it is just beginning.

The Ethiopian name for Christmas is Genna, which comes from the word Gennana (eminent) and expresses the coming of the Lord to free mankind of its sins. Genna is also the name of a hockey-like game which is said to have been played by the shepherds when they heard of the birth Christi. Men and boys in villages now play the traditional Genna game with great enthusiasm in the late afternoon of the Christmas day – a spectacle much enjoyed by village communities and elders. Genna begins early in the day, around 6 AM, when people gather in churches for mass.

The clergy prepares for the birth of Christ by fasting for 43 days, also known as the fast of the prophets. During Christmas service they lift their voices in hymn and chant just as it has been done for over a thousand years when Ethiopia accepted Christianity. Everyone stands throughout the service. This ancient rite culminates in the spectacular procession of the Tabot, a replica of the Ark of the Covenant, which is carried on top of a priest’s head. The procession makes its way three times around the church amidst ululation, chiming church bells and dazzling umbrellas followed by a throng of Christians with lighted candles. After mass, people go to their homes to feast. Food and drink is plentiful. Many homes prepare Doro Wat, a spicy chicken stew eaten with the sourdough pancake-like bread called ingera. Often Tej, a local wine-like drink made from honey, accompanies the feast.

Christmas is quietly shared and celebrated in groups of friends and family. Gift giving is a very small part of Christmas festivities in Ethiopia. Only small gifts are exchanged amongst family and friends at home. But one gift most eagerly awaited by all children is a new outfit that they wear with pride and joy on Christmas day. The festive mood continues until the late hours of the evening.

However, there is something special that endures long past the sun-drenched day of Ethiopian Christmas. The sparkle of joy, giving and sharing, extends beyond religious beliefs and spreads the spirit of peace on earth and goodwill to all mankind throughout the world.

Timket (Epiphany) is one of the greatest festival in the Ethiopian Orthodox Tewahedo Church calendar. It commemorates Christ’s Baptism by Saint John in the Jordan River. Timket is celebrated in Ethiopia on January 11 Ethiopian calendar (January 19 Gregorian calendar), two weeks after Ledet (Ethiopian Christmas), beginning on the Eve of Timket with colourful processions and ceremonies ending on the January 12 (January 20 Gregorian calendar). In Timket, Tella and Tej are brewed, special bread is baked called “Himbash” (in Tigrigna) “Ambasha” (in Amharic), and sheep are slaughtered to mark the three-day celebration.